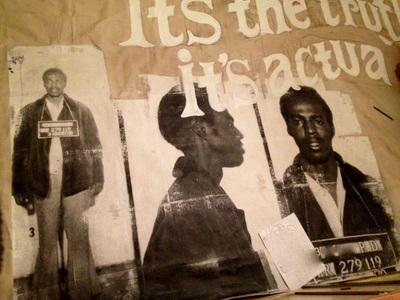 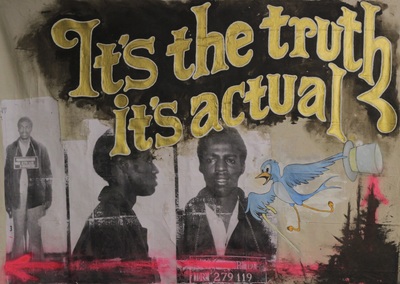 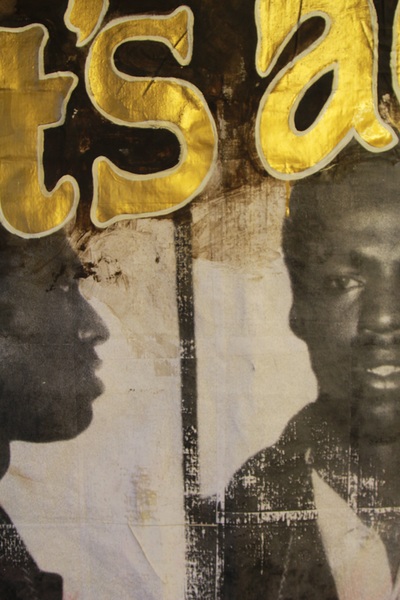 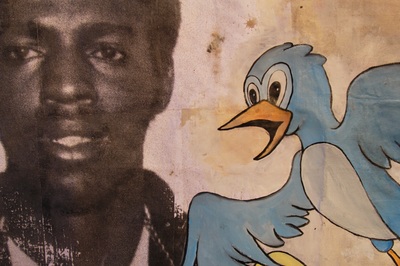 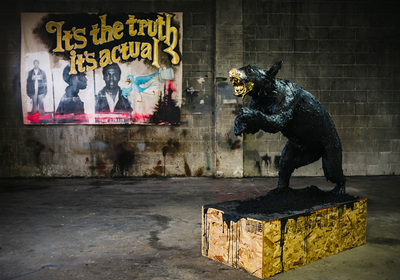 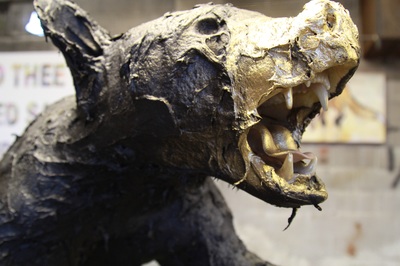 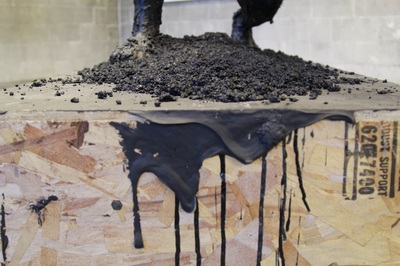 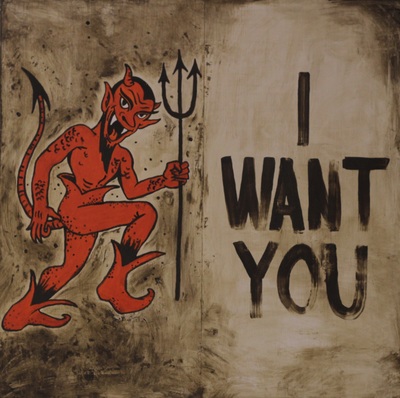 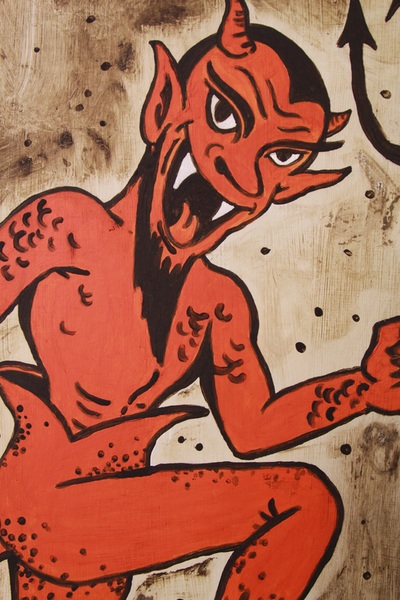 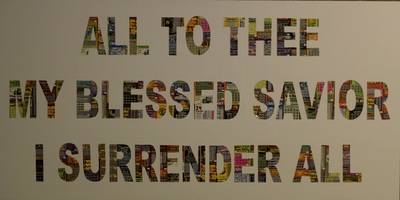 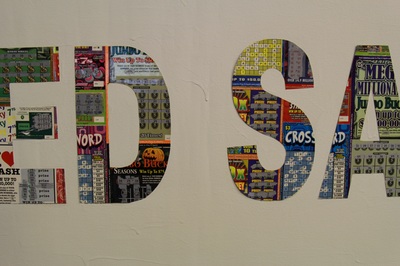 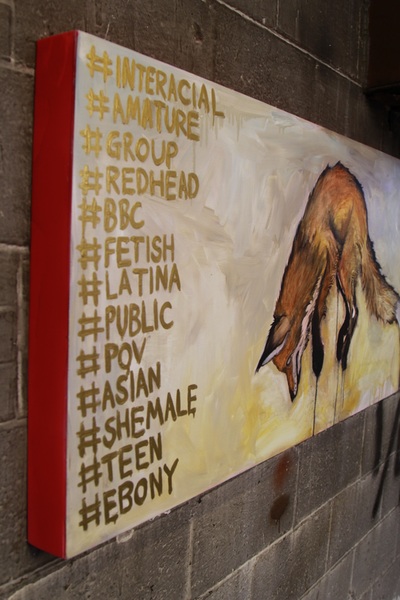 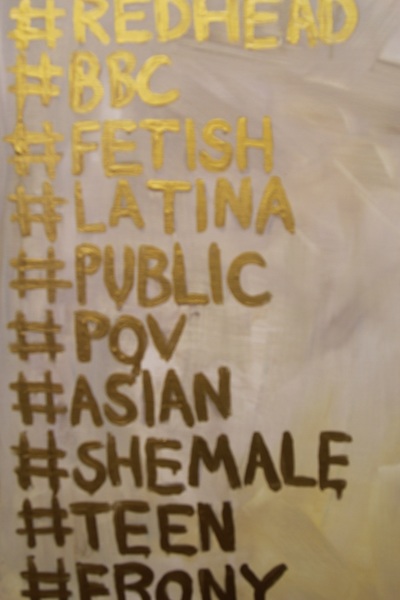 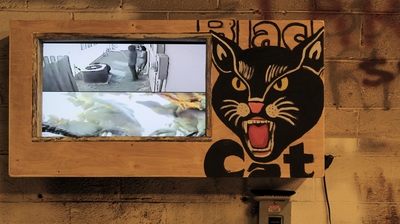 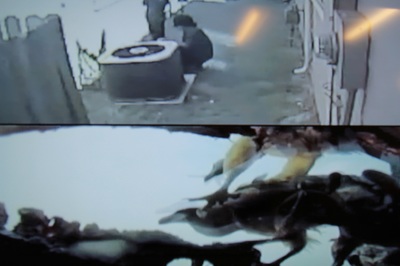 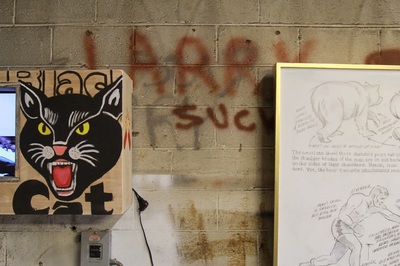 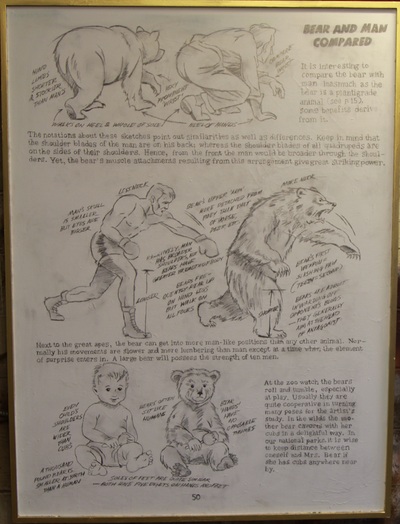 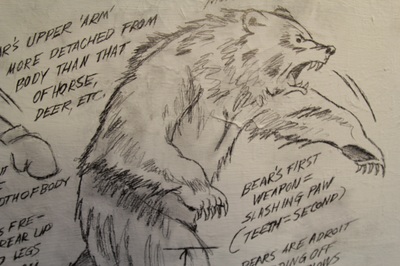 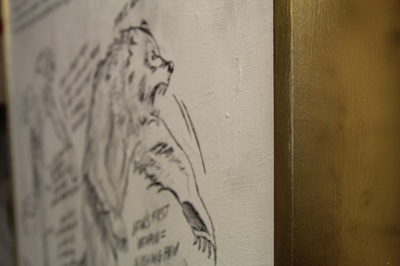 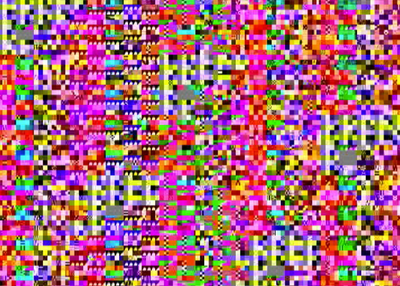 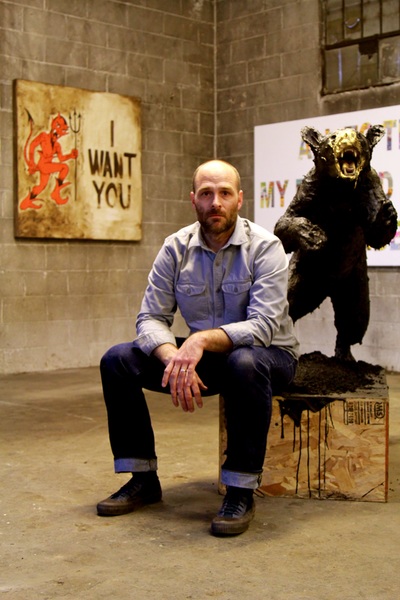 I’ve been attempting to bring Song of the South to life for about 5 years.  The ideas in this show are important to me, but extremely hard to tackle.  I decided to start chipping away at it one stroke at a time.  It has allowed me to start building a solid foundation for what I eventually hope to accomplish.
The issues addressed in this show are common issues.  I don't use the word "common" in a light way.  It is like using that word when paired with "cold".  The common cold is a horrible, miserable, disgusting experience that one cannot wait to see the end of - just as the verses I will sing are horrible, miserable, and disgusting.
First and foremost, I am a visual artist.  That is the language I speak, so that is the language I deliver.  Talking about my work is not something I enjoy doing, so I’m delivering this written companion to stand in for me.  It most certainly is not lofty and beautiful, but I hope that it will give you a broader grasp of the visual work.  This text will be akin to instructions in a role-playing board game.  It offers a basic structure, but you pretty much have to jump in and start playing to understand.
When asked what Jazz is, Louis Armstrong replied, "Man, if you gotta ask, you'll never know."
Problems addressed in this show are universal.  Like all of my work, themes are explored through my personal experience, observation, and the experiences of others.  East Tennessee is my birthplace and it is something that I've never really come to terms with.  I was all over the place with some of this subject matter in 2010.  While living on the West Coast someone (who knew I did not know how to come to terms with it) asked me to embody the South in one word.  That word was "Humidity".  It was liberating to hear it come out of my mouth.  Now I equate that word with another word:  "Slavery".  Like humidity, slavery is an overbearing, suffocating, and miserable entrapment of daily existence for people bound by something.  Slavery is more prevalent now than it has ever been.  One would think that this age of enlightenment or world wide access through the internet would be the great deliverer of information that would free the world.  It has most likely done the opposite.  According to facts completed by International Justice Mission, there are "an estimated 27 million slaves in the world today - more than any other time in human history."  (IJM works to combat human trafficking including the commercial sexual exploitation of children, forced labor slavery, illegal detention, police brutality, and illegal land seizure.)
Slavery comes in so many forms.  I will explore situations of slavery, from that East Tennessee perspective.  Song of the South will be played out in 7 ‘verses’.  These verses reference  the general progression of the Disney ride, Splash Mountain, that follow the general progression of the Disney film, Song of the South, that follows a general progression from the Tales of Uncle Remus.   TWACK delivers 7 character studies and includes Uncle Remus, The Wonderful Tar Baby, Bre’r Rabbit, Bre’r Fox, Bre’r Bear, Bre’r Possum, and Bre’r Buzzard.  Each character takes on the form of a specific social issue that I will allude to you (but, they work as a unit and can be interchangeable).  So, I step boldly into this song to sing to you.  It is not a happy song.  It is the blues.  Cornel West says, "…blues is not about triumph blues is about resistance, blues is about overcoming its about prevailing, its about persisting- but because it is tragic comic there's no triumph as it were…as a blues inflicted Christian the cross is at the center of the blues resurrection is at the center of the gospel.  Now blues brothers and sisters they don't necessarily go into the resurrection, but they go at the cross. Blind Willie Johnson - one of the greatest geniuses in the history of American civilization… when he wrote, "dark was the night - cold was the ground" that's his meditation on the crucifixion of Jesus as a bluesman - so he doesn't sing a word he moans and groans and hums and grits cause there's no language that comes close to that catastrophe and the blues is about catastrophe it ain't about problem."  I invite you to explore this catastrophe.


Although I have given some background on ideas in this show, I am not ready to discuss it at great length.  I have no answers, only questions.  This is a work in progress.  Rather than give detailed explanations of the represented characters in this show, I will let words of others help to lend form to each piece.

"And the fields as white as snow-flakes,
where the drakes brown as pancakes,
gathered for old mammy's sunday dinner,
seems they nicer did get thinner,
from the possum and fried chickens,
then they used to raise the dickens,
when they see old joe a commin'
with his banjo set for strummin'
cake-walk, shuffle, buck and wingin'
tenderly they'd soon start singin'…
-Sam Goold/Sid Caine/Al Sigel, "Song of the South"

“It happened on on of those zip-a-dee-doo-dah days.  Now that’s the kind of day when you can’t open your mouth without a song jumping’ right out of it”
-Uncle Remus, “Zip-a-dee-doo-da”

"You can forgive a young cunt anything.  A young cunt doesn't have to have brains.  they're better without brains.  But an old cunt, even if she's brilliant, even if she's the most charming woman in the world, nothing makes any difference.  A young cunt is an investment; an old cunt is a dead loss.  All they can do for you is buy you things.  But that doesn't put meat on their arms or juice between their legs."
-Henry Miller, Tropic of Cancer

"If they substituted the word 'Lust' for 'Love' in the popular songs it would come nearer the truth."
-Sylvia Plath, The Unabridged Journals of Sylvia Plath

“Women are the only exploited group in history to have been idealized into powerlessness.”
-Erica Jong

“All sins tend to be addictive, and the terminal point of addiction is damnation.”
_W.H. Auden

"All to Jesus I surrender;
All to Him I freely give;
I will ever love and trust Him,
In His presence daily live."
-Judson W. Van DeVenter

“I love the pure, peaceable, and impartial Christianity of Christ: I therefore hate the corrupt, slaveholding, women-whipping, cradle-plundering, partial and hypocritical Christianity of the land. Indeed, I can see no reason, but the most deceitful one, for calling the religion of this land Christianity. I look upon it as the climax of all misnomers, the boldest of all frauds, and the grossest of all libels. Never was there a clearer case of 'stealing the livery of the court of heaven to serve the devil in.' I am filled with unutterable loathing when I contemplate the religious pomp and show, together with the horrible inconsistencies, which every where surround me. We have men-stealers for ministers, women-whippers for missionaries, and cradle-plunderers for church members. The man who wields the blood-clotted cowskin during the week fills the pulpit on Sunday, and claims to be a minister of the meek and lowly Jesus. . . . The slave auctioneer’s bell and the church-going bell chime in with each other, and the bitter cries of the heart-broken slave are drowned in the religious shouts of his pious master. Revivals of religion and revivals in the slave-trade go hand in hand together. The slave prison and the church stand near each other. The clanking of fetters and the rattling of chains in the prison, and the pious psalm and solemn prayer in the church, may be heard at the same time. The dealers in the bodies and souls of men erect their stand in the presence of the pulpit, and they mutually help each other. The dealer gives his blood-stained gold to support the pulpit, and the pulpit, in return, covers his infernal business with the garb of Christianity. Here we have religion and robbery the allies of each other—devils dressed in angels’ robes, and hell presenting the semblance of paradise.”
―Frederick Douglass

"I refuse to "look up."  Optimism nauseates me.  It is perverse.  Since man's fall, his proper position in the universe has been one of misery."
-John Kennedy Toole, A Confederacy of Dunces

"Make your whole life revolve around sports
Walk tough - don't act too smart
Be a mean machine
Then we'll let you get ahead"
-Dead Kennedys, Jock-O-Rama

“I hate all sports as rabidly as a person who likes sports hates common sense.”
-H.L. Mencken

“The bourgeoisie has torn away from the family its sentimental veil, and has reduced the family relation to a mere money relation.”
-Karl Marx, The Communist Manifesto

“Every form of addiction is bad, no matter whether the narcotic be alcohol, morphine, or idealism.”
-C.G. Jung

"And out of that hopeless attempt has come nearly all that we call human history - money, poverty, ambition, war, prostitution, classes, empires, slavery - the long terrible story of man trying to find something other than God which will make him happy."
-C.S. Lewis, Mere Christianity

"He had been bored, that's all, bored like most people.  Hence he had made himself out of whole cloth a life full of complications and drama.  Something must happen - and that explains most human commitments.  Something must happen, even loveless slavery, even war or death.  Hurray then for funerals!"
-Albert Camus, The Fall

“Where justice is denied, where poverty is enforced, where ignorance prevails, and where any one class is made to feel that society is an organized conspiracy to press, rob and degrade them, neither persons nor property will be safe.”
-Fredrick Douglass

“There is no life to be found in violence.  Every act of violence brings us closer to death.  Whether it’s the mundane violence we do to our bodies by overeating toxic for or drink or the extreme violence of child abuse, domestic warfare, life-threatening poverty, addiction, or state terrorism.
- Bell Hooks


Thank you for attending TWACK

Art is not, as the metaphysicians say, the manifestation of some mysterious idea of beauty or God; it is not, as the aesthetical physiologists say, a game in which man lets off his excess of stored-up energy; it is not the expression of man's emotions by external signs; it is not the production of pleasing objects; and, above all, it is not pleasure; but it is a means of union among men, joining them together in the same feelings, and indispensable for the life and progress toward well-being of individuals and of humanity.”
-Leo Tolstoy